The BAUD is a novel therapy device designed to safely and quickly stimulate brain plasticity. It was originally developed for improving ADD/ADHD symptoms, and clinical use revealed it to also be effective on most emotional issues, addictive urges, and even chronic pain. FDA-cleared in 2006 as a class II device for adjunct therapy, the BAUD has since been been used in over 400,000 clinical sessions in 18 countries. Its patented technology uses specially designed sound frequencies which the patient listens to while performing a simple mental protocol based on the latest research into accelerating synaptic plasticity.

Brain imaging research is confirming the BAUD’s mechanism of action as stimulating plasticity by disrupting reconsolidation of problem circuits, primarily in the limbic system and the amygdala. This acoustical stimulation helps the brain shift neural function back to a normal level, based on its innate ability to self-regulate. The BAUD process enhances the brain’s natural neuroplasticity in a rapid and highly targeted way, which produces a safe and effective result. Clients typically see dramatic reduction in problem symptoms after the first 20-minute session. The BAUD has shown effective symptom reduction on three main types of problems: 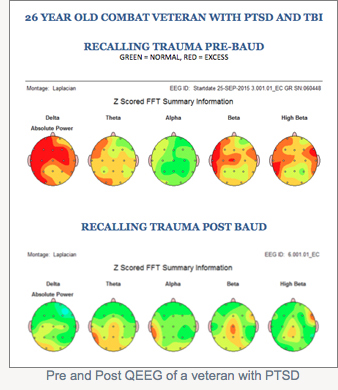 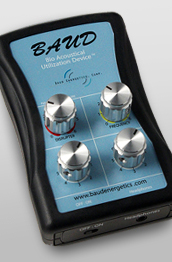 How to use it?

It takes just minutes to learn the Basic Protocol. Most clients can learn to self-administer the BAUD.  If your evaluation results suggest the BAUD will be helpful, you will meet with a psychologist who will teach you how to use the BAUD for your personal needs. After a one hour meeting, you can rent the BAUD to use it on a daily basis before deciding if you want to purchase your own directly from the manufacturer.

Understanding your Condition is Our Mission